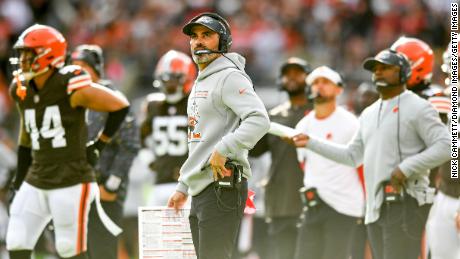 Head coach Kevin Stefanski of the Cleveland Browns looks on during the first quarter of a game against the Arizona Cardinals at FirstEnergy Stadium in Cleveland in October.

(CNN)Cleveland Browns head coach Kevin Stefanski has tested positive for Covid-19 and is set to miss Saturday's game versus the Las Vegas Raiders in Cleveland, the Browns announced on Wednesday.

"Head Coach Kevin Stefanski, who has been vaccinated and received a booster, has tested positive and has immediately self-isolated," the Browns said in a statement.
"He is feeling fine and will continue his head coaching duties virtually as we prepare for the Las Vegas Raiders game on Saturday." 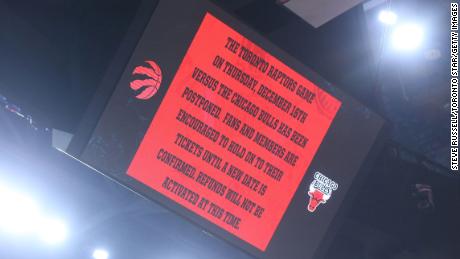 These are some of the players who will miss upcoming games due to Covid-19 protocols
Special teams coordinator Mike Priefer will serve as acting head coach and offensive coordinator Alex Van Pelt will serve as the play caller in Saturday's game.
If he can produce two negative tests before Saturday, Stefanski would be cleared to coach.
Read More
This is the second time Stefanski has tested positive for the virus, the first time coming before the team's first round playoff game against the Pittsburgh Steelers in January 2021.
On Tuesday, the Browns added eight players to the Reserve/Covid-19 list, including wide receiver Jarvis Landry and offensive lineman Wyatt Teller and Jedrick Wills Jr.

NFL says coronavirus outbreaks among unvaccinated players may lead to forfeits this season
"We are in the intensive protocols, which means you are wearing masks in the building, virtual meetings, cafeteria is just grab and go and those type of things, but we will get our work in," Stefanski told reporters Tuesday.
"That is what we do. We have done it before. We will have our virtual meetings, and then when we are on the practice field, we will make sure that we are locked in and ready to go."
A league source tells CNN that 28 NFL players tested positive for Covid-19 on Tuesday.
The news comes a day after the league saw 37 positive tests among players. The two-day total more than doubles the 29 positive tests from players between November 14 -- 27, the last publicly released testing data from the NFL.

Category : Motorsport
PreviousChicago Blackhawks reach settlement with former player who said he was sexually assaulted by a coach in 2010
Next‘We should be less afraid to be afraid,’ says Emily Harrington after historic El Capitan climb