Powerlifter Karenjeet Kaur Bains 'found a love for being strong.' Now she wants to inspire more women to take up strength sports 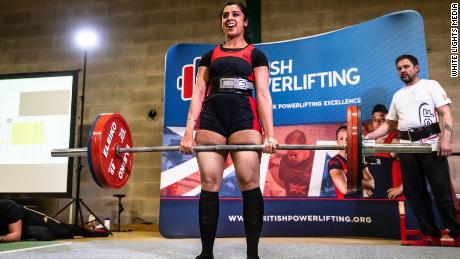 Karenjeet Kaur Bains is the first Sikh woman to compete for Great Britain in powerlifting.

(CNN)Karenjeet Kaur Bains started her sporting life as a sprinter, but when she took up powerlifting at the age of 17 -- initially to get faster and more explosive for athletics -- her focus soon changed.

"I found a love for feeling strong and never looked back" is how Bains explains the switch of sports.
Under the guidance of her father, a former bodybuilder and powerlifter, she quickly displayed her prowess in the squat, bench press and deadlift. Three months later, she entered -- and won -- her first ever competition.
Fast-forward eight years and Bains now holds the accolade of being the first Sikh woman to compete for Great Britain in powerlifting.
Her "ultimate dream," she says, is to be the first Sikh female world champion, as well as using her platform to inspire other girls to take up the sport.
Read More
"Strength sport is often such a male-dominated sport," Bains tells CNN.
"You get the stereotype that you're going to turn into Arnold Schwarzenegger with a wig on, or something like that ... it would be a dream for me to have girls like me coming up the ranks in the juniors and they look like me and you never saw them before." 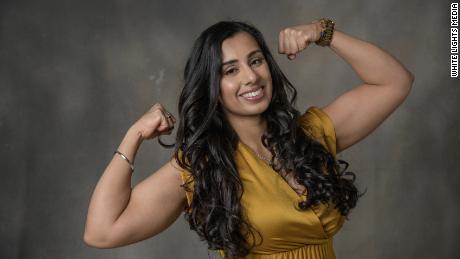 Bains started powerlifting when she was 17 and entered her first competition a few months later.
Bains, a regional 300-meter sprint champion as a teenager, found sporting inspiration throughout her family when she was growing up.
Her older twin brothers were national level 400m hurdlers, and she recalls watching them fly around the track "like Superman."
Her mother, meanwhile, was encouraged to take up athletics by Bains' father and won local championship medals in the hammer throw, discus, and shot put in her 40s.
"She had always wanted to do sport when she was younger, but she never got a chance because she came from Punjab, India, and back then, girls didn't have the same chances to do sports and education," says Bains of her mother.
"Her older brother was a champion wrestler in India as well, but she couldn't, and I think she always wanted to do something sporty.
"My parents never stopped me, they always pushed me equally," she adds. "I've had role models everywhere, really." 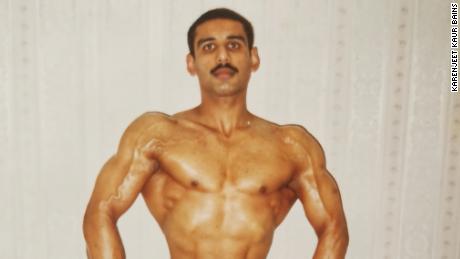 Bains' father, Kuldip Singh Bains, is a former bodybuilder and powerlifter.
Having helped with her training during her time in athletics, Bains' father has also been her coach throughout her powerlifting career.
On top of passing on the wisdom he accumulated during his own career, he's also helped build a gym at the family home in Warwickshire, England, which is where Bains does much of her training today.
"It's quite raw and rustic. It's nothing fancy," she says. "My dad's an engineer and he's made a lot of the machines and the weights and everything, so it's all been done by hand.
"We have a really fantastic relationship. Obviously, my dad always says he considers himself a dad first and then a coach second ... it's really nice how it's almost developed quite from the grassroots -- when I was a schoolgirl with a dream -- all the way to the international stage. And I did this with my dad." 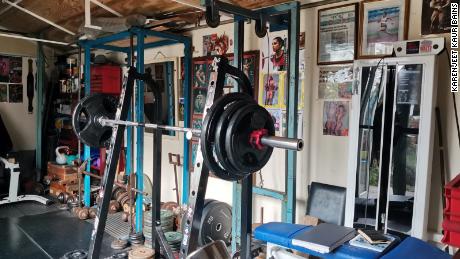 Bains' home gym includes equipment built by her father.
One of the highlights of Bains' powerlifting career so far, she says, was a gold medal in the junior division at the 2019 Commonwealth Powerlifting Championships.
In October, she competed as a senior lifter for the first time at the World Bench Championships in Vilnius, Lithuania, placing sixth and equaling her competition best of 92.5 kilograms (almost 204 pounds).
Her focus is now on training throughout the winter in preparation for the national championships at the start of next year.
But improving on her biggest lifts and winning more titles is just one of Bains' powerlifting goals.
"I became the first British Sikh female to go to the world championships for Great Britain, but then I don't want to be the last," she says.
"I want this to open the gates for many more diverse people, not just Sikh people, anybody from a minority, diverse background who might not have had a chance." 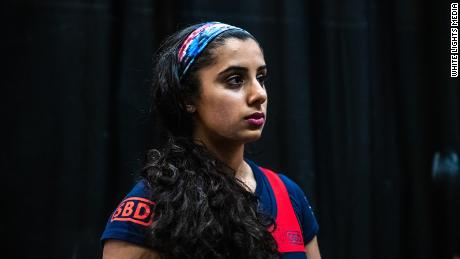 During her career, Bains hopes to inspire more diverse participation in strength sports.
Bains' religion forms an important part of her sporting career.
She chooses to compete under her full name and include the traditional Sikh name Kaur because it serves as "a reminder to carry yourself in higher regard, to be a good person, to help people," she explains.

Shiva Karout looks to lift up a nation after tragedy

Shiva Karout looks to lift up a nation after tragedy 04:36
Each time she walks onto the stage at competitions, Bains takes time to remember God's name and reflect on the hardships she's overcome.
"If it wasn't for my faith, I think I would not have been as mentally honed in ... it definitely helps me channel focus in a positive way," she says.
According to a report released in 2018 by Sporting Equals -- a charity promoting equality, diversity and inclusion in sport and physical activity -- which engaged 194 South Asian women in the UK, 74% of respondents claimed to be inactive and undertook less than 30 minutes of physical activity per week.
The report also found that South Asian women in the UK are more likely than men to be inactive.

In acknowledging some of the entry barriers South Asian women can face in sport, Bains says: "I think the issue is often in our culture -- you need to focus on your academics, get a good job, don't want any distractions. And often, they see that if you pursue things outside of academics, that might be a distraction.
"That might be one of the reasons that some girls don't do it or they just don't see enough role models. I've always hoped to get my message out there ... because I think if you see someone who's done it, you can use that as an example and follow suit."
As part of promoting that message, Bains visits schools and posts regularly about her powerlifting career on social media.
Her life can be busy. Bains is an ambassador for Brawn -- a global, community app for strength athletes created to bring together and connect anyone interested in strength training -- and also has had to juggle training with work as an accountant given her powerlifting career isn't centrally funded.
While taking her accountancy exams, most days would involve getting up at 6 a.m. and going to bed at 1 a.m., in between which she would fit studying and going to the gym around her day job in London.
"There were never enough hours in the day for me," says Bains. But it all seems worthwhile when she gets sent messages saying she inspired someone to go the gym or take up a new sport.
"If I know I'm helping someone out there or giving them a spark of motivation," she adds, "then I did a good job."