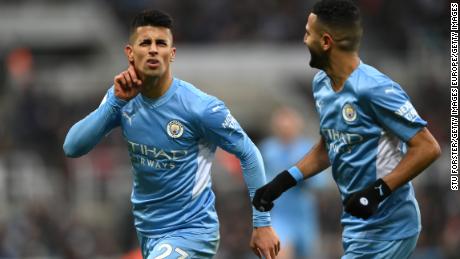 (CNN)Manchester City extended its lead at the top of the Premier League to four points with a 4-0 hammering of relegation-threatened Newcastle United.

Ruben Dias, Joao Cancelo, Riyad Mahrez and Raheem Sterling secured a comfortable win for City, which has now scored a remarkable 11 goals in two matches following the 7-0 drubbing of Leeds United in midweek.
Pep Guardiola's side has found its groove in recent weeks to record eight consecutive Premier League wins, with only Liverpool able to stay within touching distance.
Liverpool will aim to close the gap back to one point when it travels to Tottenham later on Saturday.
City's victory over Leeds is the team's 34th win of 2021, setting a new record for most wins in a calendar year by any club in English football's top flight.
Read More
READ: Premier League match between Aston Villa and Burnley postponed hours before kickoff due to Covid-19 issues 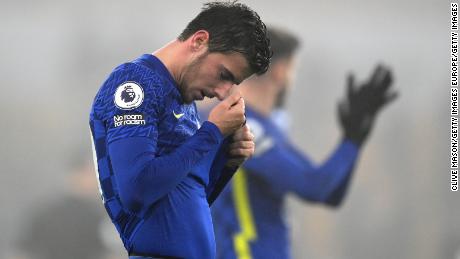 Mason Mount looks dejected after Chelsea's draw at Wolves.
Meanwhile, Chelsea lost more ground in the Premier League title race after stuttering to a goalless draw away to Wolves.
It's the fifth time in eight league matches Thomas Tuchel's side has failed to pick up all three points, causing the team to fall six points behind Manchester City at the top of the table.
In recent weeks, the team has struggled the recapture its brilliant early season form, which led many fans and pundits to believe Chelsea would be a front-runner for this season's Premier League title.
Chelsea had a request to postpone the match denied on Sunday morning, as the team continues to struggle with absences due to Covid-19.
The Blues are currently missing several key men, including Romelu Lukaku, Ben Chilwell, Jorginho and Kai Havertz, and were only able to name six substitutes against Wolves.
The Premier League was forced to postpone six matches over the weekend as multiple teams continue to deal with outbreaks of Covid-19.
Saturday's match between Aston Villa and Burnley was called off just hours before kickoff, after Villa reported an increased number of positive tests in the squad.